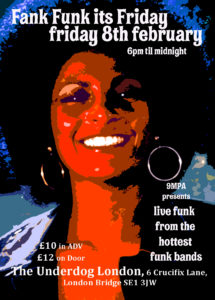 The concept of these Foxy Funky Hot nights is to unleash some raw, tunes from some of UK’s top live bands. TBSF understand the meaning of the word “entertainment” and hit on that positive energy note, that leaves gagging for more by the end of the night.

With “nowhere to ride” near London Bridge for supping a pint ‘n’ partying to thumping good live music, The Underdog in Crucifix Lane, is the perfect place to hang out. It has become a prestigious Art Gallery and Music venue. It’s independently run and located under one of the last original arches at London Bridge. You would do well to check out the foxes, down here. First up is:-

The Big Smoke Family follow in the footsteps of modern New Orleans funk bands such as Galactic and Trombone Shorty. They draw inspiration from Mardi Gras Indians, James Brown, The Meters and Rebirth Brass Band. Big Smoke Family have dedicated themselves to the funky sounds of New Orleans. Check out their a unique blend of horns, street beats and original compositions.

These guys can play a bit. Featuring regularly at Ronnie Scott’s, The Magic Garden, Pizza Express, Hootanany and at Festivals like London Jazz Festival, Bestival and Ealing blues, they kick ass.These electrifying performers have credits that include Dr. John, Maceo Parker, Zigaboo, Seal, Ernest Ranglin and many more the BSF are some of the UK’s funkiest musicians.