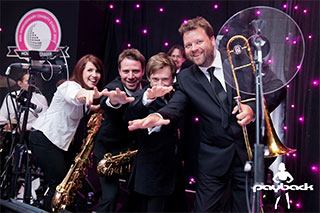 Payback played at the Baroness Amos Bursary Awards back on the 9th July and it has just been confirmed that nearly £27,000 has been raised. Playing with a cut down version without two horns and Julia their lead singer, Plamen de Bonev fronted the show himself. 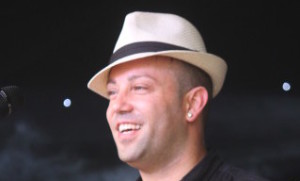 Plamen de Bonev is one of Payback’s lead male singers

Jon: “How long did it take the band to set up and get going as I know there where time constraints?”

Coleen: ” Not long, The band were great. They had everyone up dancing from tune number 1 until the end. Everyone forgot about the tube strike and the journeys home!”

Jon: “I hope that you and Valerie were happy with the evening and the outcome? And how much money was raised last Thursday night?”

Jon: “As a matter of fact how and why were the Baroness Amos Bursary Awards started?”

Coleen: ” The Amos Bursary was launched in 2009 by my sister Valerie ( Baroness Amos ) my brother and I along with our family and friends, in memory of our parents Mike and Dolly Amos who died within 8 days of each in 2008. Our website is www.amosbursary.org..uk

Jon: “How many years has Baroness Amos’s Charity been going”?

Coleen: “The bursary was concieved in 2008 and launched in 2009 with 7 students. Today we have 75 students on the programme with 130 mentors and 27 key volunteers”

Jon: “Did you have a live auction and if so what was the most expensive prize?”

Coleen: “Yes and it was the holidays”

Jon: “Were there any special people present?”

Jermaine Jackman ( Winner of the Voice in 2014)

Jon: “How did the travel problems impact on the evening?

Coleen: “No impact. Words cannot begin to express how much we appreciate the effort guests made to battle through the chaos caused by the tube strike to get to the Grange Hotel by any means – by black cab, by minicab, by Overground train, by Intercity train, by car and on foot. Tales of the struggle to get to our venue abound. Some o walked miles to get there, some were trapped in crawling traffic for over three hours. They came from as far afield as Birmingham. As a consequence we had around 15 guests who did not arrive.”

Jon: “Where there any special sponsors for the night?”

Jon: “What was your biggest headache before the evening began?”

Coleen: “Worrying about the tube strike and the possible impact. (e.g. Would the band make it through the traffic?) We had no control over that and neither did they!”

Payback had a great night and were happy to take part in the Amos Bursary Awards Night, which helps so many young people. We hope to see many of the party people at Hideaway, SW16 on Friday 9th October.

This site uses Akismet to reduce spam. Learn how your comment data is processed.