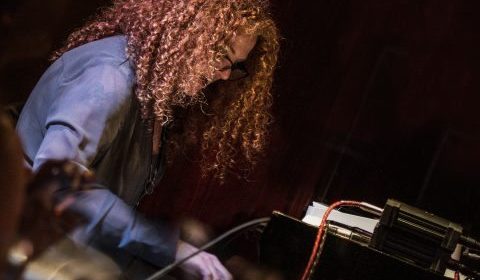 Janette Mason, the Musical Director at Hideaway was caught Just Off Stage.

The occasion was  during the interval for her show, Wall To Wall Prince, last Saturday 6th May. Janette, jazz pianist and composer, extraordinaire, has arranged and produced all the in-house shows at Hideaway for the past four years. Here Jon Harris from Music News at 9, the news channel for Number 9 MPA, tracks her down to ask about her up and coming projects.

With Aretha Franklin, as well as Dusty Springfield and Shirley Bassey shows coming up, Janette has a busy year ahead. Already Bond to Bond and Wall To Wall Stevie have been sell-out shows. She must be doing something right!! Plus the launch of her new project Red Alert during the London Jazz Festival at Hideaway is coming up on 13th November.

She arranges all the music, organises rehearsals and orchestrates the band on the night. Janette has worked with the best in the business on various jazz and non-jazz projects. This is for just not just one night but for Thursday, Friday and Saturday. So for 6 shows a year this Musical genius fills Hideaway time after time.

Her previous album D’Ranged is a master piece of jazz arrangements or de-arrangements, depending on which way you look at the tracks. Suffice to say I play these tracks constantly in my car on the way up from the country to town. It is jazz at its very very best.

Check out “4 Wheel Drive” on Soundcloud

We are all looking forward to her crowd-funded new album called Red Alert. This time Janette used Phundee which is a London Based outfit that have a hands-on approach second to none.

For info go to www.janettemason.com

For ticket information of the shows at Hideaway go to What’s On @hideawaylive.co.uk

This site uses Akismet to reduce spam. Learn how your comment data is processed.